Hi.  My name is Serena and I’m a lifelong Caucasian.  As such, I have unwittingly been the longtime recipient of white privilege.  Upon being enlightened by this factoid I first hoped to practice mindful humility; however, I was informed that was just the white man’s guilt talking.  So screw it.  I now plan to enjoy all the perks of my elite social status.  Who knows, maybe it’ll offset the vagina tax to which I’m subject. 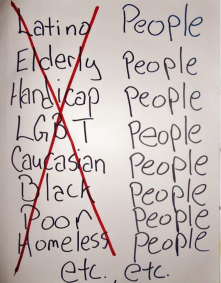 The above image was the catalyst of a bizarre debate this week.  While I, and no doubt the originator, believed it was an expression of equality, others saw it as identity erasure of target groups.

If I still had an opinion it would be invalid because of aforementioned Caucasionism.  It would be very easy to become apathetic over the whole issue.  Easy for me, any way. I’m the privileged,  remember?  But I think the simplest and healthiest approach to this applies to most things in life:  If there are two ways to view something, chose the one that makes you happiest.

If feeling victimized is what makes you happiest then I’m sure there is some target group out there that’ll be pleased to have you.