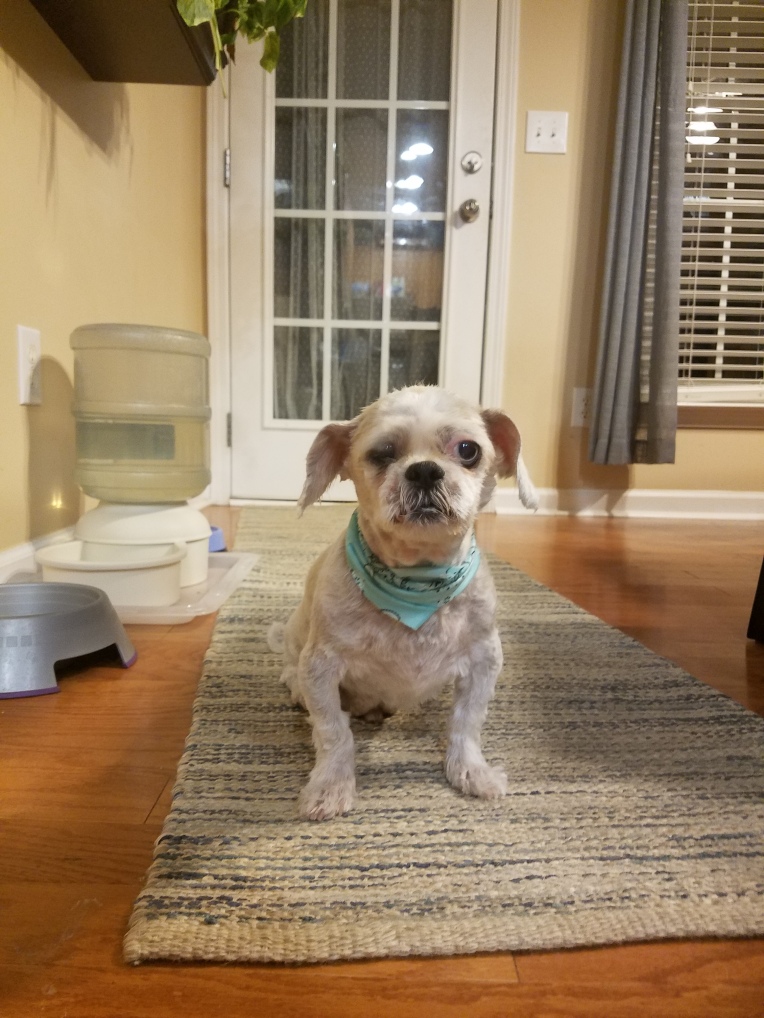 A week ago we gathered family into the small veterinarian office to say our goodbyes.  I explained that he’d perked up when friends visited and that by dinner time he’d accepted a nibble of chicken from my hand.

The whole time we spoke,  Toby stood on the table.   That morning,  he couldn’t even lift his head.

I couldn’t do it.

We devised a plan and the vet administered some more antibiotics and pain meds.   By the next morning, she told us, we’d know the right thing to do; he’d show more small improvement,  or he wouldn’t.

All of this was coinciding, outside of our awareness,  with the wearing off of a 24 hour anti nausea medication Toby had been given on Monday.  Maybe that explains his convulsing and limpness,  but not the fever,  high white blood cells, or fluid in his lungs.

I’ve continued to give him antibiotics and pain meds and each day he has improved a little.   On Thursday,  he pooped for the first time in a week.   On Friday,  he walked himself to our back yard to spend some quality time in the sunshine.  By Sunday, he began fighting back with enough strength that it now takes two people to administer his medication.

The fur hanging in his eyes made him look so sad and burdened, so I tried to give him a trim.   I cannot be trusted with scissors, and the services of a professional were called in to clean up my mess.  Now bald, I watch him waddle and I realize his back legs don’t always work like they should.  There are some hard, jagged lumps under the skin over his upper torso.  We will see the vet again at the end of this week, and I believe we’ll find out we’re treating an acute symptom of something much worse.

But that’s ok.   I’ve had time to love him now,  and I’ll keep doing it until he needs me to make the final,  loving call.   Last week, we weren’t there.   Not even close.  By needing me to keep him alive, Toby made me want him to live.

When he took his turn for the worse,  I was in New York at a writer’s retreat.  I got to hear the story of a woman who, in the final hours of her husband’s ex-wife’s life, was asked to do something extremely easy,  yet personal to bring comfort to the woman who had been her natural enemy.  She described that moment of care-taking beautifully,  as it transformed years of animosity, not into pity,  but forgiveness and humanity.

I was reminded of a quote by Benjamin Franklin.  Just as last weekend,  I am still paraphrasing,  but the gist is this:  If you want to make a friend of an enemy,  ask them to do you a favor.  Ask to borrow their book, or a cup of sugar.  Ask them to apply your chapstick when your arms no longer work.  Ask them to hold you down and squirt antibiotics into your throat when you are dying, but still non – compliant.  Once your enemy has helped you, they are vested in your well-being.   They are a part of your success.  They will root for you.

And I know from experience,  that hot-wired connect goes both ways.

If you’re being weighed down by your dislike or outright hatred of somebody and you’d like to stop feeling so crummy about it, quit waiting for them to change.   Stop judging them and go help them.

I mean,  if you tell me you like hating people, then carry on.   I don’t buy it,  and I’d love to bake you some cookies,  or help you pull weeds, or something – but you keep doing you.

But for those – and there are many – who are genuinely in despair about the  politics of nearly – half of the country, maybe we can try to find ways to help them out with their personal struggles – not so that their ideology wins,  but so that our own peace and well-being does.

For a poor, little, naked shih-tzu who only knows two tricks, he sure is a wise and dedicated sensei.