Jack’s fidgeting gets more frenetic, pacing back and forth between his big sister in the living room, and me in the kitchen.  In my face he whispers desperately, “Is this really how I have to spend my last day of summer?”

Despite an upbringing shunning such things, Madi fell in with a Baptist church earlier in the summer.  They recruited her from table twelve at the Buffalo Wing restaurant where she waited tables the last three summers; invited her out to coffee, then lunch, then church on Sunday mornings and something they call small group on Thursday nights.

Small group is held in member’s homes and is made up of eighteen to twenty five year olds.  Most of them are already married, something that surprised Madi, but not me.  Sexual development and hormones don’t actually follow any indoctrination regarding premarital sex, and I remember vividly the pressure to give holy meaning to the weakness of the flesh.  The most devout will marry young so as not to have sex out of wedlock, while the most human will have sex anyway, but assign some permanence or significance to the relationship for no other reason than to feel right, or righter, with God.  I waited until she asked me to share my insights.

I admit I was leery when Madi made plans to meet the pastor and several of his assistants at a local bistro.  She said they had to meet on Tuesday, because the pastor was going to Mississippi on Wednesday.  My tongue struck quicker than my filter.  “Why?  Does he have to pick up more snakes?”

“How did you know?” she asked with eyes wide, like I was a palm reader telling her some deep, dark secret about herself.

I told her about the small sects of Baptist believers that routinely handle snakes to prove that God is protecting them.  Most of the deaths by snakebite in this country come not from people who accidentally wander into a pit of vipers, but people who are intentionally handling snakes; religious zealots account for a large number of those.

Online, Madi found many pictures of the pastor holding snakes, and she showed me.  Some were long and thick, some were short and striped.  Others were bright green and small as pencils.  Most were constrictors, but all were non venomous.  Begrudgingly, I told her it appeared that he was not a snake handler, but a snake enthusiast.  He does it for hobby, not for sacrament.  Not unlike the difference, I learned when I got married, between an Elvis impersonator and an Elvis tribute artist.

One Sunday afternoon, Madi met us at the local brewery when church let out.  We ate our carried-in burgers and drank our beer.  She mentioned that she was surprised not to run into any church members doing the same; it’s a small town.  Mike and I informed her that Baptists don’t condone drinking.  Or dancing.  Or cards.  I recounted one lovely and lavish wedding I attended at my mother’s church when I was a teen.  The reception was held in the church basement, with a long table of pot luck crocks and fold up chairs lining the walls for people to sit with their Styrofoam plates and eat off their own laps.  No first dance, no toast, no cake cutting ceremony.  Or maybe I’d already gone outside to hang out with the other bored teens by then, because I can’t think of any scriptural reason not to have a cake cutting ceremony – not even if you take or mistake everything quite literally.  A few days later, Madi reported that she’d asked small group about drinking and everyone claimed that they personally would never drink, but didn’t see a problem if someone else wanted to on special occasions.

My biggest concern came one evening while I painted my son’s bedroom.  Across the hall, I heard Madi listening to a podcast of the same hell fire and brimstone indoctrination my mother used to listen to on the radio and satellite television.  As if channeling her dead grandmother, I found her sitting at her desk, sewing something.  I listened quietly from the doorway, and only spoke up when I heard this man rail against ho-mo-sex-shuls and other despicable deviants.  I could not be silent any more.

“Is this okay with you?  This man is preaching hate and intolerance, and is precisely why I didn’t raise you in the church.  This is not Christianity, and it’s not alright.”

She told me she didn’t agree with him, but she was listening because she wanted to know what the church she was attending really believed in.  I took some comfort that if she was still listening and learning, it wouldn’t be long before she couldn’t stomach the lot, either.

Then about a month ago, Madi asked me if anything was on my schedule for August twenty 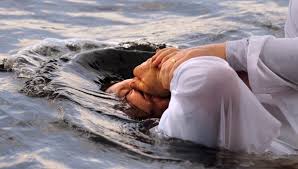 eighth.  It was the day before school started for Jack and Cate, but we had no specific festivities for Back-to-School Eve.  And then she invited me to the river, where she planned to be baptized with about seventy other people on that evening.  Their summer recruitment plan had been quite fruitful and I could not help but wonder if there was an award to the top proselytizer; a trip to Mississippi and two free snakes, perhaps?

I felt nothing but worriment last week when I realized that the day was quickly approaching.  But man cannot live by dread alone, so I started planning ways I could take my sense of failure to instill my beliefs and anti-beliefs into my firstborn and turn them into something to look forward to.  Also, I wanted to take some of the gravity and significance out of the day.  I suggested that we tailgate the baptism; show up early with a bucket of chicken and some good tunes.  Apparently my eleven herbs and spices are not that original.  The event starts three hours before the actual dunking.  There is live music and the church is ordering Papa Johns for the masses.   I just hope that the pastor actually ordered pizza and, in the spirit of things, did not get carried away and order anchovies and crust in commemoration of the fishes and loaves.

I understood when she retook a philosophy class that she’d passed, but wanted to replace her grade to improve her GPA.  I voiced my strong desire that she retake driver’s ed before getting her learner’s permit.  It’s okay in my book to re-do things until you get them right, or right enough – but being born again?  She did it perfectly the first time; forty-five minute labor with no complications.  She was such a beautiful, easy child.  I don’t understand why she wants to be born again.  It’s like scoring a 1600 on the SAT and still wanting to take it over.

Jack is right to not want to spend his last day of summer freedom watching his sister sell herself into this church.  But that’s what we’re doing, because she is family.  And because I still hope that the steady, constant voice telling her that God is love, not judgement, not hatred, not damnation will come in louder and clearer than pulpit shouts of indictment and sentencing.  And because if she decides one day to get married, there’s no way I’m letting her have a dry reception in a damp old basement.

2 thoughts on “Going Down to the River to Pray”