I first noticed the creeping panic last Sunday.  This panic is like that.  It stays low and moves slowly and silently, hoping I won’t notice it until it’s in my chest and trying to crawl out my throat.  But ha!  I saw it coming.  Knowing it is there and keeping one eye trained to it keeps it low and slow.  At the pace it was moving, there was no way it was going to get to me before I left the ground and fly for Italy.  Because that’s what this panic is about – something screwing up my trip.  And panic can’t reach me in the air.  But last night it found my week spot and pounced.

I’m a dreamer – vivid, Technicolor dreams with sights, and sounds, and touch and the recent upgrade to include smells.  That’s what’s leading me to hang glide, after all.  And last night’s submission to the dream catalogue was a doozy.

See, there’s this doomsday cult that rigged a nuclear blast right here in my neighborhood 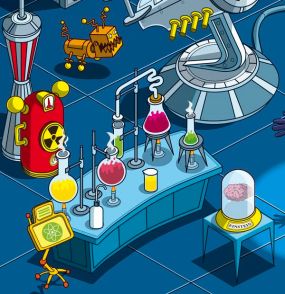 that’s been counting down for five years.  FIVE YEARS!  The story line felt lifted from that long-gone TV show, Alias, but the bubbling blue liquid that was going to be dropped into the bubbling purple liquid causing a series of – I don’t know, marbles to roll down a chute and push the clearly marked BOOM button? – looked like something out of Dexter’s Laboratory.  Skip the heart thumping drama that ensued and you find me, with my family, in a prone position not a quarter of a mile from the blast, basking in the light and heat and wind, waiting to be turned to dust.  Except for that last part, it was a surprisingly pleasant feeling.

And then we didn’t die.  We got up, walked around, and wondered why my face and neck had been burned purple while everyone else appeared ok.  Obviously, we were going to die a slow death from radiation poisoning.  But for the time being, we felt fine and I concluded the radiation caused a reaction between the minerals in my face powder and the oils in my skin and had essentially tattooed me.  Great.  Now I’ll be stared at in Italy.  Because that was my biggest concern.  A bomb was just detonated that was supposed to destroy the planet and when it didn’t, I’m still singularly focused on getting to Italy.  But no.  Air travel is shut down.  All air travel.  Around the whole world.  Mike isn’t so distraught because there are three boys sleeping on our couch down stairs and they’re going to want pancakes when they wake up.  Pancakes.  That’s how I know I’m not sleeping anymore, the world is no more irradiated than it was last night, and I am still going to Italy.